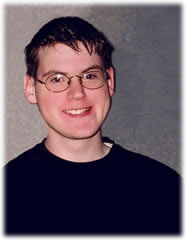 Mike Myhre was born and raised in Fort St. John, BC. He has been drawing as long as he could hold a pencil and was in the French Immersion program for the entire duration of his education. In his graduating year he tied for first place in the 2nd Annual Teletoon Scholarship Contest, and went on to take the full-time classical animation program at the Vancouver Film School. After graduating he sold his student film to Film Roman, (best known for producing The Simpsons, and King of the Hill) for use on their Level13.net Internet animation site. Mike is currently trying to find a steady job in the animation industry, where he has aspirations to work on many parts of production, including storyboards, character design, and eventually directing.

With the Award money he plans on producing his own animated shorts for possible use in festivals, the Internet, or to aid in pitching an idea for an animated series. As hobbies, Mike enjoys going out with his friends, drawing some more, and watching more TV than is probably recommended.

2011 Update: Mike has been working in animation for about 5 years now, drawing story-boards which has been his aspiration since 9th grade. He’s worked on George of the Jungle, Being Ian, Martha Speaks, Kid vs. Kat, League of Super Evil and more. He also self-publishes his own comic “Space Jet” spacejet.blogspot.com. Fans can email Mike at cuppa_joe@hotmail.com